If pressed to compare Courtney Barnett to another creative talent, I would skip over the likes of Paul Kelly, Robert Forster or Bob Dylan, though each of those comparisons has its own merits. No, the first thing that comes to mind in examining her artfully constructed (but seemingly artless) lyrics is the deceptively simple prose of The Great Gatsby author F. Scott Fitzgerald. On album opener "Elevator Operator," it is the tiny details that Barnett slots into the lyrics - soy and linseed crackers with vegemite, a "Botox frown" - as if nothing else could fit in their place, that make her akin to the great novelist.

Of course, Barnett is not a disaffected young man writing in the jazz age, but rather a young woman from Melbourne who fronts a shambolic rock band who go by The Courtney Barnetts. Her songs flow with an effortlessness doubled by the endearing drawl of her thickly-accented delivery, capable of being both intimate and alienated at the same time, conjuring deep emotions with barely a quiver, just like the steady, measured hand of Fitzgerald that knows just when to show its cards. Take, for example, the moment when Barnett digs into the heart of the sentimental ode to house-hunting "Depreston," lifting into an airy alto as she sings "Well, it's a deceased estate," before croaking "Aren't the pressed metal ceilings great?"

This new record, Sometimes I Sit and Think, and Sometimes I Just Sit is Barnett's proper debut album, though it is preceded by a reissue of her two EPs under the title The Double EP: A Sea of Split Peas that brought her great acclaim and international attention in 2013. The album is, to date, the most pristine representation of Barnett's talents, displaying a much richer and more rewarding sound than the conjoined EPs. The uncluttered songs are simple, but not rudimentary. The band play with great skill, especially when they are allowed to stretch out as on the seven-minute "Small Poppies" and the extended coda that closes the aforementioned "Depreston." The lyrics are the star of the show, and the spare arrangements and light, airy production give them the room to breathe that they deserve.

Even when the band picks up the pace and the electric guitars are cranked up, we don't lose sight of Barnett's acerbic wit and playful sense of storytelling. Two of the highest highs are first single "Pedestrian at Best," a blur of raging rock energy with an incredible sing-along chorus, and "Nobody Really Cares If You Don't Go to the Party," where Barnett finds the contemporary poetry in a totally mundane situation in which we've all found ourselves. "I wanna go out but I wanna stay home," goes the one-line chorus before giving way to a finger-blistering guitar solo. Barnett and her band expertly change up sound and texture to perfectly support each song's tone and feeling, such as when an organ gleefully (almost sarcastically so) bubbles its way through "Debbie Downer" and the lengthy and downcast "Kim's Caravan" forgoes the thumping drums and elastic bass of the rest of the record for something drifting and almost jazzy.

One of the greatest strengths of the album is that it is a cohesive work while still maintaining its sense of exploration and variety - even the mellow "Boxing Day Blues" that closes the record with resonating acoustic strums, distant swathes of electric guitar and one of Barnett's downright prettiest vocals is clearly the work of this extraordinarily talented artist. "Lover, I've got no idea" she repeatedly sings at the album's end. Barnett is intelligent and projects an aura of wisdom, but she doesn't know all the answers. However, like all the most-enduring creative people throughout history, she's always asking the right questions. Time will tell if her exquisite song-craft is as timeless as it feels, but in this moment right now, Courtney Barnett has tapped into something current, refreshing and very real. One thing I can tell you is that Jane's Lament, the debut full-length album from Sydney band Au.Ra is pretty extraordinary. King Street is quite unlike any other in Sydney. With so many places calling for your attention, you could probably do with a little guidance, yes? 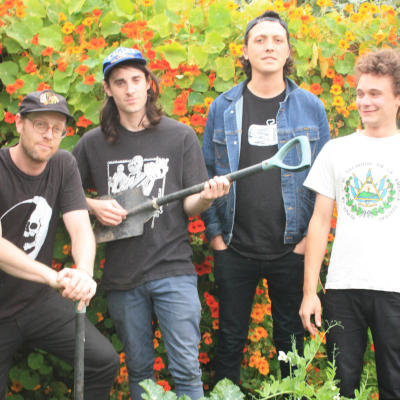 In 2015, Vivid Live will once again bring an incredible crop of local and international talent to the stage in and around the Sydney Opera House. Now is your chance to get up close and personal when the endearingly deadpan Courtney Barnett and her band play the Metro in May. Twerps have already sold out one show at Newtown Social Club in May. Don't miss out on seeing Twerps again and catch them at their newly scheduled show.